This is the fourth and final post summarizing the discoveries of my 2015 Great Grand Genealogy Tour.  Today’s entry is dedicated to the Korbs (my maternal grandmother’s branch).

Grandma’s sister Marjorie, also known as Sister Maris Stella, has spent her life in service to the Catholic church.  I always felt a special connection to Sister, my mother’s godmother.  She was one of the first adults that I related to; she wrote letters to me when I was barely old enough to read them.  On this trip, I spent one night at Sister’s convent in Fargo.  I was curious to learn more about her career.  She has no children to carry on her memory, and her own memory is fading now, so I felt that this was the right time to ask for her recollections.  I was excited that she had plenty to say, not only about her career but her parents too.  Sister spent decades working with the poor, the addicted, mentally ill, and afflicted.  Then she wrapped up her career on a “social justice” committee, where she wrote newspaper articles, talked to leaders, and even spent a day at a UN forum.  Someday I’ll write more about this intriguing conversation, but while she’s still alive, you can ask her directly! 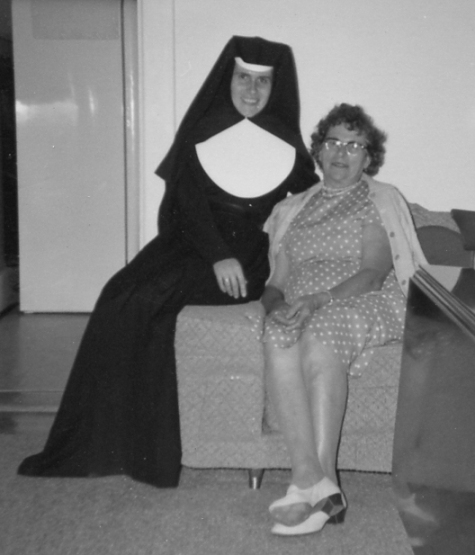 Sister with Great Grandma, 1963. She says this is one of the few times she was ever actually in habit. 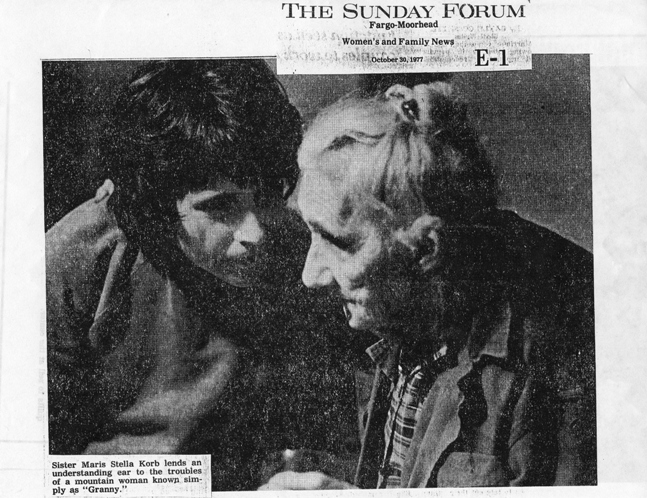 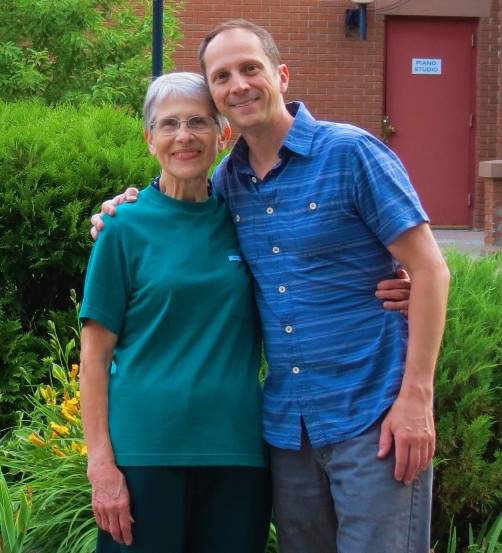 The final point of interest was Turner County, SD.  This was where Grandma’s grandparents (my 2GGPs) met.  He was Bernard Janowski and she was Christine Schowalter.  3GGPs Schowalter, German immigrants, were homesteaders with a fairly large farm near Hurley, SD.  This was just 100 miles away from De Smet, where Laura Ingalls Wilder grew up in her “Little House on the Prairie.” 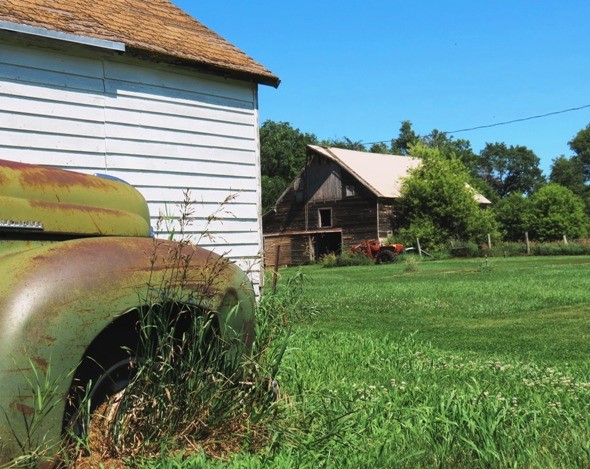 3GGPs Schowalters’ land. For all we know, the barn and playhouse may have been theirs. 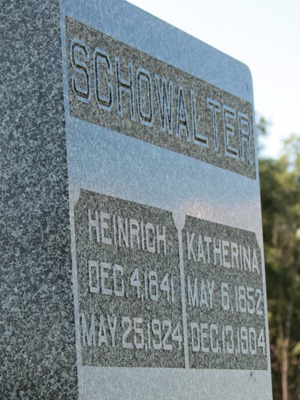 3rd Great Grandparents Schowalter are buried near their homestead in Turner County, SD.

3GGPs Janowski immigrated from Poland in 1892 and spent their first few years in Marion, SD.  They did not own land there but lived with a sponsor family.  It was in this area that Bernard and Christine met and married. 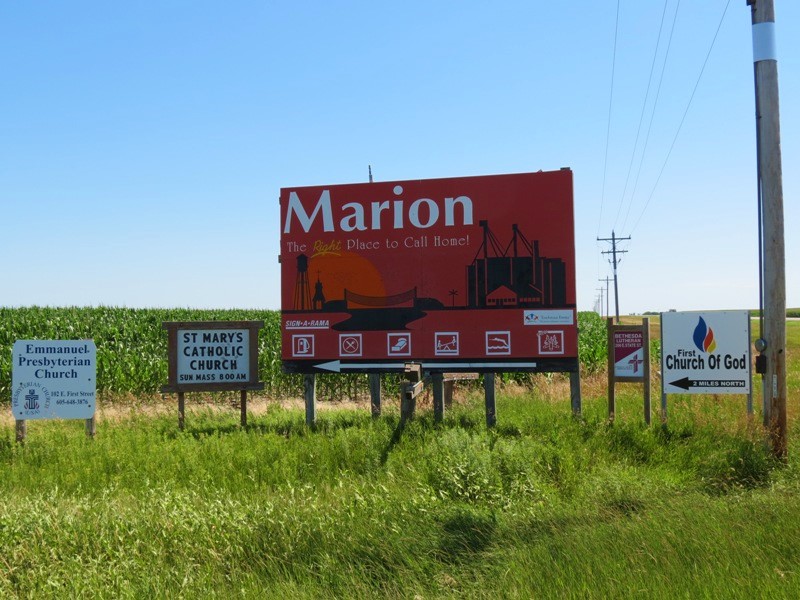 The Schowalters had been Mennonites for centuries.  The Mennonite line in our family came to an end when Christine married Bernard, a Catholic.  The Janowskis left SD shortly afterward to homestead their own land in Calio, ND.  Of course, many lines of the family are still there.  2GGF Janowski was known to visit SD occasionally for the rest of his life, though I don’t know what was still drawing him there.

This September 11, I feel compelled to write a few words about the War on Terror.  It is an important issue this year as Americans make big choices.  We all know that emotional thinking can cloud judgment – and the War on Terror is one of the most emotional issues of our time.  When you look at it objectively, though, you reach a striking conclusion.  Yes, terrorists are definitely evil.  But in the grand scheme of things, they are not very deadly to Americans.  When you compare the cost of this war to its benefits, it is very hard to justify on its present terms.

American conservatives describe the War on Terror as a “Clash of Cultures”.  This characterization is an ideological belief, not a fact, and it is not productive.  A look at worldwide terrorism deaths reminds us what the fight is really about:  instability within the Moslem world.  Of the roughly 20,000 terrorist deaths worldwide in 2013, a majority of them were in Iraq or Afghanistan.  90% of them occurred in 10 African / Asian countries that are home to terrorist groups.   1 These groups are militias aimed at local governments or other sects.  Most of these groups don’t target outsiders.  ISIS and al Qaeda are the main exceptions.  The US and other countries engage them directly in combat, and they strike back at our civilians.

By contrast, on a typical day, 90 Americans are killed by guns at home or in the streets – by angry acquaintances, accidents, or suicide. 3  Another 90 Americans are killed in car accidents.  4  The overwhelming majority of preventable deaths in the US – 2,000 per day – are caused by our own stupid decisions to smoke, drink, overeat, and abuse drugs. 5

Terrorism is not even close to our biggest problem.

Nevertheless, more than half of Americans are “very concerned about Islamic extremism.” 6  That’s a higher rate than in Pakistan!  This disconnect is not surprising.  People don’t think with statistics.  We think with emotions.  Lifestyle-related deaths are not as evil or terrifying as terrorist attacks.

The emotionally-driven political response has been vastly out of proportion.  This war has cost trillions of dollars 7 , killed perhaps a million people 8 (wow), and sacrificed 7,000 US soldiers in combat 9 to avenge our 3,000 dead.  Not only that, but ironically most of those 400 American civilian deaths since 2001 have resulted from counterattacks against our War on Terror.

This conflict means less to the US, but more to the world, than most Americans realize.  The US needs to downscale its response, make it more efficient, and share it more evenly with its allies.  Our trillions could be much better spent on intelligence, police, and security.  Better yet, the responsibility and the budget should be spread among many nations.  The global solution to the problem is a very interesting discussion, and beyond the scope of today’s post.

As for the upcoming election, the two presidential candidates, for all their mudslinging and difference in style, have roughly similar platforms on the War on Terror.  Some of the key differences include:

The more serious difference between the candidates and their supporters is their outlook on the conflict.  Trump buys into the “Clash of Cultures” storyline.  He and his voters see ISIS as first and foremost out to get America.  That outlook doesn’t get us any closer to the real problems in West Asia and their solutions.  Trump is riding on the coat tails of American fear, perceiving the terrorist danger as so large that it threatens the entire nation.

FDR said, “The only thing we have to fear is fear itself.”  Yoda was just as wise when he said, “Fear is the path to the dark side.  Fear leads to anger, anger leads to hate, hate leads to suffering.”  For Americans right now, it is just as important to conquer our terror as to conquer the terrorists.